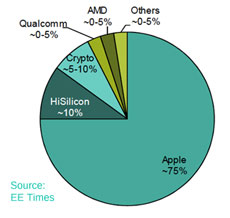 5G phones will be in short supply until the fabs, especially TSMC, add more high-end capacity. (Probably second half of 2019.) 5G New Radio requires much more complicated chips. Linley, an analyst I respect, estimates NR chips are ten times as complicated as previous generations. Without the most advanced chip processes, speed and power requirements cannot be met. Only three companies in the world are manufacturing at that level: TSMC, Samsung, and Intel. Only TSMC is shipping this year. At this node, the plants alone cost US$6 billion and development support costs billions more. Global Foundries gave up.

Ted Rappaport says we'll have mmWave phones by Xmas, but that may be only a very few around the world. Verizon CEO Hans Vestberg doesn't expect very many phones until the second half of 2019. He told Wall Street he is pressing his suppliers to do better

Huawei, and MediaTek are reliant on TSMC's 7 nm chip foundry. Apple has already bought 75% of what TSMC can produce in the near term. See chart from EE Times.

Huawei has claimed 10%, much of which will be used for their remarkable Kirin 980 advanced 4G. That will severely limit chips for everyone else until new capacity comes online, probably in mid-2019.

Intel, for the first time in more than a decade, has fallen seriously behind schedule. Its 10 nm chips are comparable to what the others call 7 nm and were expected by now. Wait until next year, CFO Bob Swan now says. (below.)  Intel is now not expecting to manufacture ICs in 10nm until 4Q19, some three years after the original launch for Cannon Lake processors on 10nm was expected in 2016. EE Times Intel is production limited at 14 nm as well, allowing AMD to pass them in processors for PCs.

Unisoc/Spreadtrum also has announced a 5G chip. Unisoc is partly owned by Intel and works closely with it. Unisoc, pronounced Uni ess oh see (System on Chip) has extraordinary capex plans of over US$50 billion, far more than the worth of the company. Provinces and cities are providing much of the funding in order to grow local industry. It is ultimately controlled by Tsinghua University and hence the government, but substantial private investors lead management. A report in Seeking Alpha claims "the company’s 5.375% bonds maturing January 2023 have soared to a little more than 9.6% -- a rise of 3.5% since early May." That's a worrisome sign but there is very little confirming information in English.

I have announcements but no clear data on the radio frequency front end, also difficult to produce for 5G phones.

Extreme ultraviolet (EUV) lithography – a long-awaited and game-changing technology for producing ultra-small semiconductor circuit patterns – is finally moving from the research lab to the manufacturing line. And Samsung Foundry, I’m pleased to report, will be the first company to put this promising technology into commercial production.

Samsung Foundry has been developing EUV technology for years, in partnership with Netherlands-based ASML Holdings and other key technology suppliers. During that time, we’ve produced hundreds of thousands of test devices, including fully-validated 256 megabit (Mb) static random-access memory (SRAM) chips.

By the second half of this year we expect all the pieces to be in place to start mass-producing the world’s first EUV chips on our new S3 manufacturing line in Hwaseong, Korea. Meanwhile, to provide additional capacity and an alternate manufacturing source, we recently broke ground for a second EUV line in Hwaseong. It should be ready to start production in 2020 at an estimated cost of $6 billion.

Both these production lines will run our new 7-nanometer (nm) LPP (Low Power Plus) EUV manufacturing process, which uses high-energy EUV light to create chips with ultra-fine device features with critical dimensions as small as 7nm. For comparison, a common virus cell is 10nm across, and a microscopic strand of DNA is roughly 2.5nm wide, while individual silicon atoms measure slightly less than 1nm.

Long-term, EUV technology will enable us to build the next several generation of chips with ever-shrinking nano-scale features, while squeezing increasing amounts of functionality onto each chip. In the near term, it will help us produce chips that use less power, require fewer mask layers, and take less time to design and manufacture than a traditional multi-patterned process.

We announced our first customer for our new 7LPP EUV process technology in February, when Qualcomm chose our Samsung Foundry to build its latest Snapdragon™ 5G mobile chipsets. Qualcomm expects the chipsets, which are intended for cellphones and other mobile devices, to have a smaller footprint than previous designs. That, in turn, will provide more usable space inside upcoming products to support larger batteries or slimmer designs, as well as achieving significantly improved battery life through process improvements and more advanced design.

Chipmakers use high-resolution photomasks to transfer the intricate circuit patterns of each chip onto the surface of silicon wafers coated with photosensitive chemicals. These masks act as stencils that selectively allow some areas of the chip to be exposed to high-intensity light, while others are shielded.

An important advantage of EUV lithography is that it requires only one mask and exposure for each layer of a chip’s design. Without EUV complex multi-patterning techniques are required at the 7nm level, so this is a very significant improvement. In a multi-patterned process the circuit patterns to be etched onto each chip layer are first divided between as many as four photomasks. The masks must then be carefully positioned and, one after the next, exposed by intense light to project the desired pattern onto each layer of the chip, which is then chemically etched to remove the exposed areas. Those steps are repeated many times until all the features to be printed on the wafer are complete. This time-consuming process, which is used to create hundreds of chips on a 12-inch diameter silicon wafer, can easily take a full day for each of the masks. EUV eliminates these complex and costly multi-patterning steps and completes the same task using a single exposure.

While the development of EUV lithography has perhaps been slower than expected and has faced numerous technical challenges, it offers a way to bring the industry back to single mask patterning, drive us farther down the single digit nanometer technology path, and to remove a great deal of complexity from the design and manufacturing process. With EUV, you’re not only reducing the need for a lot of expensive masks, you’re also opting for a process that requires significantly fewer processing steps that will speed a product through the fab quickly compared to today’s multi-patterned methods. EUV lithography will also help to reduce the effort of designing new chips by simplifying engineers’ design flows and reducing the complexity of design validation.

I fully expect the coming EUV era to result in faster, better chips rolling off the assembly line in substantially less time. It will significantly speed your new product’s time to market by a month or more while meeting your customer’s requirements in the big data and high performance computing driven era of hyperscale datacenters, high performance networking, AI, ML, and fully autonomous driving. Now that’s a really big deal for the industry, and one that’s been worth waiting for!

EUV. 7LPP. Samsung Foundry. Bringing you the future of design and manufacturing.

To our customers and partners,

The first half of this year showed remarkable growth for our industry. I want to take a moment to recap where we’ve been, offer our sincere thanks and acknowledge the work underway to support you with performance-leading Intel products to help you innovate.

First, the situation … The continued explosion of data and the need to process, store, analyze and share it is driving industry innovation and incredible demand for compute performance in the cloud, the network and the enterprise. In fact, our data-centric businesses grew 25 percent through June, and cloud revenue grew a whopping 43 percent in the first six months. The performance of our PC-centric business has been even more surprising. Together as an industry, our products are convincing buyers it’s time to upgrade to a new PC. For example, second-quarter PC shipments grew globally for the first time in six years, according to Gartner. We now expect modest growth in the PC total addressable market (TAM) this year for the first time since 2011, driven by strong demand for gaming as well as commercial systems – a segment where you and your customers trust and count on Intel.

We are thrilled that in an increasingly competitive market, you keep choosing Intel. Thank you.

Now for the challenge… The surprising return to PC TAM growth has put pressure on our factory network. We’re prioritizing the production of Intel® Xeon® and Intel® Core™ processors so that collectively we can serve the high-performance segments of the market. That said, supply is undoubtedly tight, particularly at the entry-level of the PC market. We continue to believe we will have at least the supply to meet the full-year revenue outlook we announced in July, which was $4.5 billion higher than our January expectations.

To address this challenge, we’re taking the following actions:

The actions we are taking have put us on a path of continuous improvement. At the end of the day, we want to help you make great products and deliver strong business results. Many of you have been longtime Intel customers and partners, and you have seen us at our best when we are solving problems.