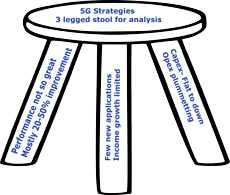 We now have data from the field: 5G isn’t close to the hype, which implies that revenue growth will be limited. Fortunately, the costs are also coming in low. This report covers how smart builds and sensible choices in focus can help in an era of limited growth.

I needed a framework to think about 5G Strategy for an analysis report I'm writing for STL Partners. This isn't everything to consider, but it's a good starting point. Improvements welcome.

5G capacity/speed  is not even close to the hype.

Millimetre wave, less than 15% of 5G through 2025 or later, should be offer about three times the performance of 4G or 5G in lower frequencies.

Latency on Verizon’s 5G network is announced as 30 ms, within 5-10 ms of 4G latency today. It measures as low as 20-23 ms. in the first locations. That probably reflects improved backhaul/transit, because LTE tests almost as low in the same locations. 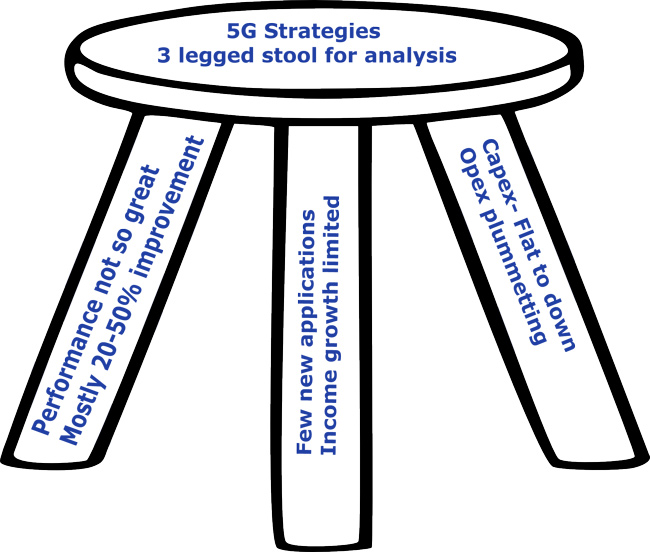 There are very few applications/use cases that will require 5G rather than 4G performance in the next 3-6 years.

IoT and nearly everything else, including connected cars, works fine on LTE.

Massive video surveillance with facial recognition will probably require more than 4G in some locations.

Extended reality streaming is a natural application for low latency networks. Some industry experts believe 20 ms latency or lower is required. Others believe 10 ms or lower in necessary. Verizon’s 5G network is specified as 30 ms. Edge networks or improved backhaul/transport may be required, not just 5G. In addition, many people “just don’t want to put a heavy device on their head.” Large volume is not guaranteed.

Enhanced Mobile Broadband is jargon for “more of same.” It is by far the most important 5G use for at least the first few years. 5G does offer more capacity and lower cost per bits. I believe improving existing services will be the best way to monetize 5G for years.

This report reviews many possible applications that can benefit.

The “high cost of 5G” is a myth, respected NTT DOCOMO CTO Seizo Onoe has been saying since 2016.

In 2017, Verizon asserted they could build one of the world’s most advanced 5G networks without increasing capex. It actually reduced spending in 2018 as it built the new network.

In 2018, Deutsche Telekom, AT&T, and Orange also announced they could build 5G with the same or even lower capital spending. DT and Orange forecast that would continue at least through 2021.

2019 capital spending plans for nearly all major carriers have been announced. Very few are increasing spending substantially despite a major effort in 5G.

Operating costs are falling precipitously. Both Verizon and AT&T are seeing costs falling at 40% per year and expect that rate to continue.

Traffic growth is also falling. Cisco estimates U.S. growth will fall to 30% per year in 2021, less than expected productivity improvements. Most carriers will be able to maintain current profit margins despite traffic growth, unless over-capacity inspires severe revenue drop.

Conclusion: Nearly all carriers across the world remain highly profitable but have seen little growth for several years. 5G is unlikely to change that. The strategy at least for the first years of 5G is to become more efficient, not count on new income. Increased capacity and lower costs will allow income growth if products are improved and well marketed.