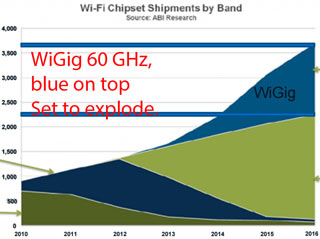 Aquila, a solar powered, 1,000 pound aircraft with a wingspan longer than a 737, had a first test flight on June 28. Huge engineering problems need to be solved before a fleet of Aquilas provide backhaul for rural cell towers. They are spending $tens of millions into advanced wireless research, building gear to test the state of the art. Aquila is no longer intended to serve people broadband. Instead, Facebook has the far more realistic plan of providing backhaul in extreme rural areas where fiber and terrestrial microwave would be too expensive.

Mark Zuckerberg and his top team are deeply committed to connecting everyone, a mutual friend tells me.  Their Internet.org was inappropriate but their engineering is at the forefront. A 96 antenna massive MIMO rig delivered ten times the performance of typical LTE today. Their 60 GHz wireless mesh Terragraph prototype demonstrates how neighborhoods can be connected at multi-gigabit speeds. 60 GHz WiGig is likely to explode as Intel and Qualcomm are including it in new wireless chips and offering "Tri-band" local networking. The chart at right, from ABI, shows the trend coming in WiGig.  The lighter blue sector in the upper right is WiGig. This chart is from 2013. The major growth is happening in 2017 and 2018, two years later than expected. (Wi-Gig deserves a long article if I ever get the time to write it.)

Facebook is "open-sourcing" most of their wireless findings rather than looking to earn a direct return.

Of course, anything that delivers the Internet to more people is great for both Facebook and Google; Facebook already has 115M active users in India and is growing rapidly in Africa.

Much still needs to be done to make this a practical product, as the Facebook blog below makes clear.

November 10. At Facebook’s Connectivity Lab, we are actively working to develop a variety of terrestrial and airborne technologies to help connect the world. One of our goals is to provide connectivity in areas without traditional infrastructure and reliable power sources, so these technologies should be low-cost, energy efficient, and able to support a capacity of tens of gigabits per second over long ranges.

In recent years, the millimeter-wave (MMW) portion of the radio frequency spectrum has emerged as a viable option for supporting such high-capacity links, and there have been many advances in MMW component technology. Still, many technical and environmental challenges remain at the system level. A group of Connectivity Lab researchers and engineers are working to address them with next-generation MMW point-to-point links.

Earlier this year we tested a terrestrial point-to-point link in Southern California, and are excited to announce that we’ve demonstrated a record data rate of nearly 20 Gbps over 13 km with MMW technology. Using a set of custom-built components, the team achieved this milestone with only 105 watts of total direct current (DC) power consumption at the transmitter and receiver. The transmission used a bandwidth of 2 GHz, resulting in an overall spectral efficiency of 9.8 bits per second per Hertz.

To put this in perspective, our demonstrated capacity is enough data to stream almost 1,000 ultra-high-definition videos at the same time.

The technology we tested is applicable to a number of Connectivity Lab’s solutions. For example, it could be used as a terrestrial backhaul network to support access solutions like OpenCellular, or as a reliable backup to free space optical solutions such as the laser communications gimbal and optical detector in case of fog and clouds. Ultimately, the point-to-point MMW radio link is expected to serve as the connection between a ground station and Aquila, our solar powered UAV. However, we still have several connectivity and technical challenges to resolve before the technology is fully ready for deployment.

Ideally, both ground-based and air-to-ground connectivity technologies will support high-capacity, low-power links over long ranges, but each has unique constraints. Terrestrial wireless links will have to be deployed on towers or structures in regions where there is intermittent or no electricity, leaving solar panels as the primary alternative for providing power to the terminals.

Our goal is for Aquila-to-ground links to support capacities in excess of 30 Gbps over 30-50 km. In addition, since Aquila is a long-endurance, solar-powered UAV, there are strict size, weight, and power consumption constraints on the communication payloads hosted on the aircraft. Building communication links with these requirements presents some unique scientific and engineering challenges, the likes of which have not been addressed before, and overcoming these challenges will have a positive impact on connectivity around the world.

The recent emergence of MMW solutions is driven partly by the large swaths of available contiguous bandwidth and recent advances in MMW component technology. MMW spectrum refers to the portion of the radio spectrum corresponding to wavelengths between 1 mm and 10 mm, or the equivalent of a carrier frequency between 30 GHz and 300 GHz, which is between 10-100x higher frequency than what is used for WiFi. However, the advantage of available bandwidth in the MMW spectrum also comes with some well-known challenges:

Building and testing the system

Our first step was to characterize the wireless channel between a mountaintop in Malibu, CA, and a building rooftop in Woodland Hills, CA, separated by a line-of-sight distance of 13.2 km. At each location, we installed commercially available E-band equipment that offered data rates from 100 Mbps to 3Gbps based on link conditions, as well as a weather station. This allowed us to develop a long-term characterization of the 13-km link under different weather conditions such as clear skies, clouds, fog, high winds, and rain. We installed a similar setup at one of our data center locations to characterize losses under heavy rain scenarios. The link characterization helped the team pick the right components for the test.

To address the low DC power consumption constraint, the team developed a technique known as post-amplification spectrum multiplexing. This enables the use of multiple smaller, more efficient power amplifiers instead of one big power amplifier with low efficiency, which avoids the challenges associated with efficient amplification of multi-carrier signals.

We then replaced the RF components in our link characterization setup with our custom-built system, using the same off-the-shelf 2-ft parabolic antenna at the transmit end and 4-ft antenna at the receive end. The 4-ft antenna is representative of the ground station in an air-to-ground link. In practice, it must be able to track moving transmitters on the airborne Aquila fleet continuously, with high precision and high accuracy to maintain uninterrupted high data rates.

In our setup, the 3-dB beam width of the 4-ft antenna is around 0.2 degrees, and to achieve the nearly 20 Gbps data rate, the antenna needed to be pointed with an accuracy better than 0.07 degrees. This is equivalent to a baseball pitcher aiming for a strike zone smaller than the size of a quarter. Simple GPS coordinate based pointing does not meet the precision pointing requirements of our system. Additionally, all error offsets in the antenna bore-sight and the mount have to be adequately calibrated.

We found that tracking the sun is a reliable method for the antenna and mount bore-sight calibration. The position of the sun is very precisely known for any location, at any time of day. By pointing the antenna at the sun and tracking its position for several hours, we could work backwards to calculate the calibration offsets of the antenna and the mount. This algorithm allows us to install and calibrate this system anywhere in the world. For high precision pointing we use a well known RADAR technique known as conical scanning where the narrow antenna beam is intentionally nutated and then the antenna is moved in the direction of the highest received signal strength observed during the nutation.

The team is currently flight testing its first generation air-to-ground bidirectional link capable of 20 Gbps in each direction. The aerial payload is mounted on a Cessna aircraft and is being flown at altitudes up to 20,000 ft.

The next generation air-to-ground communication system capable of supporting 40 Gbps each on uplink and downlink between an aircraft and a ground station will be flight-tested in early 2017. We will continue to push the limits of wireless capacity over long ranges while staying within the tough size, weight and power constraints of Aquila communication payloads.