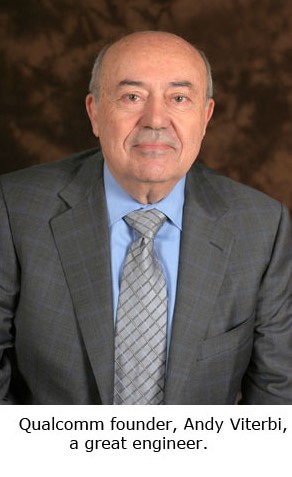 An honest answer wipes out the case for LTE-U. Assume the signal measures -80 dBm and it works. Will your LTE-U protect my Wi-Fi against interference?

The answer is no. The best data available is that half of the Wi-Fi signals are -80 dBm or lower. Qualcomm's Dean Brenner and Mingxi Fan are speaking this week at the CTIA show. I hope someone asks them.

Verizon and Qualcomm insist a test to -72 dBm detects all Wi-Fis and prevents interference. These are log scales; -72 dBm is much stronger than -80 dBm.  "LTE-U will not harm or interfere with Wi-Fi," the folks from Qualcomm and Verizon tell policy makers. (I found that or an equivalent statement 7 times, including in official FCC filings.) They go further, adding, "If LTE-U interferes with Wi-Fi, it should be prohibited." I agree.

That's why the Wi-Fi Alliance, an industry group, proposed testing down to -82 dBm. That level does allow some interference rather than fully protecting Wi-Fi/ New York City says they find signals down to -90 dBm. A good engineer suggests -85 dBm or -86 dBm.

Dean is paid over a million a year, I believe. It's his job to make sure questions like that are never asked. He's done such a good job even some tech reporters miss the story. Mingxi is a very respected engineer but will probably not disagree with the company line.

The four giant telcos could commander as much as half of the Wi-Fi spectrum, each taking a 40 MHz chunk. Wi-Fi is too valuable to allow so few to enclose so much of the commons. Anyone greedy in the use of spectrum harms all of us.

2.4 GHz Wi-Fi is already crowded. 4.9 GHz is headed that way. "Some of our customers are moving to higher bands because of reliability and congestion problems in the 5 GHz band," Boris Maysel of Siklu tells me this week. Siklu supplies microwave backhaul to Webpass, recently bought by Google. Shai Yaniv of Ceragon generally agrees.

Stanford Professors Goldsmith and Cioffi  separately spoke of problems with an excessive user in a related context. 802.11ac allows 80 MHz and soon 160 MHz channels. Even one or two users claiming that much can crowd out others. That lets the companies advertise speeds over a gigabit. As the bands develop congestion problems, this will become an issue.

Qualcomm refuses to accept simple tests of "Does it cause interference?" They throw in a red herring, that some Wi-Fis in the field have problems and cause interference. They then insist the primary test should be whether their proposed LTE-U are no worse.

Wi-FI has been improving and will continue doing so - led by Qualcomm Atheros. Brenner and buddies claim, "LTE-U will not interfere." (future tense, emphasis added.) They should be testing improved Wi-Fis shipping today and in the predictable future. Instead, they demand rigged testing, using systems soon to be obsolete.

The comparison with older WiFis is irrelevant to the public interest question, Will these four companies significantly harm Wi-Fi, important to us all. It does, of course, especially if they only test at 100X the signal strength of real world receivers. Brenner knows his LTE-U would collapse on the facts, so he's leading a multi-million dollar campaign to make us look elsewhere.

"These are not the interferers you are looking for,' says the magician.