1.6 gigabytes cellular, 8.1 gigabytes Wi-Fi in USA. Hating overage charges, Americans are shifting away from cellular. Strategy Analytics is finding the percent of traffic over Wi-Fi is increasing. That's pretty simple for most people - just don't watch TV when you aren't in Wi-Fi reach.

SA's data is based on a panel of 3,000 phones, enough for statistical significance if randomly chosen. Given that's it all opt-in, it's likely skewed toward more self-aware users. I'd guess a random panel would be slightly less Wi-Fi centric, perhaps ?75% rather than 83%.

The possibly biased sample also leaves me somewhat skeptical about the gap they found between black and white Americans in cellular use. Their data show US Blacks use 11.2 gigabytes/month and Whites 9.4 gigabytes. Since relatively few Americans are Wi-Fi only on data, that probably isn't the explanation. I'd also want to correct for age, income and region. The differernce found isn't huge but the idea is provocative.

Here's the chart and their pr. 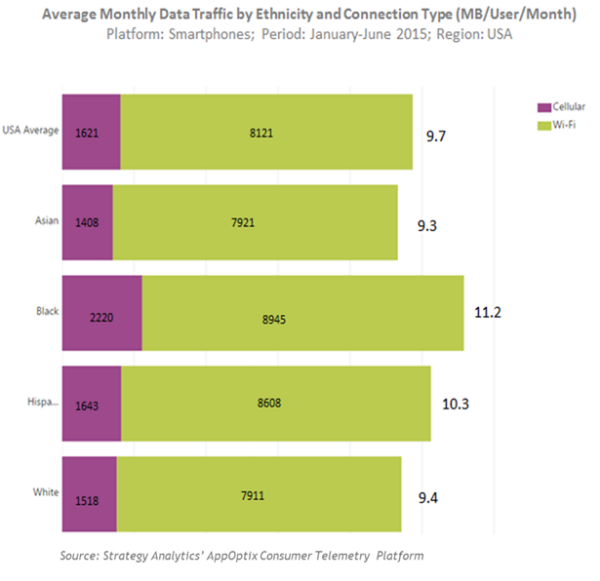 Smartphone Data Traffic Explodes in US, Witness over 300% Growth in 2 Years.

Boston, MA - August 31, 2015 - According to Strategy Analytics’ Telemetry Intelligence Platform, consumer appetite for data (Cellular and Wi-Fi combined) has exploded over threefold between H2 2013 and H1 2015. During the first half of 2015, on average, US Smartphone users consumed 9.7 GB / Month, of which only 1.6 GB / Month or 17% of the total data was generated on Cellular networks.

The analysis is based on over one million individual application sessions from 3000+ panel members in the US. The results are powered by Strategy Analytics’ state-of- the-art Telemetry Intelligence Platform by leveraging three core components – a best-in-class telemetry application, an opt-in panel, and big data analytics framework to support rich analysis.

Additional findings from the study include:

Bonny Joy, Chief, Consumer Telemetry Platforms, said:  “Our data suggests that service plans geared towards African Americans and Hispanics show distinct traffic patterns on both Cellular and Wi-Fi networks – the most notable among these offerings are the Unlimited Plans from Boost Mobile and the Pay-As-You-Go options from Tracfone.

Barry Gilbert, Vice President, said: “Our data indicates consumers are increasingly relying on Wi-Fi for data traffic, and this trend is well echoed in some of the recent plans from Google’s Project Fi and Republic Wireless, where Wi-Fi is set as the default service. Major MNOs and MVNOs should take notice of these trends in creating service plans that maximize usage without overburdening their networks.

Strategy Analytics’ Telemetry Intelligence team will be present at the upcoming CTIA Super Mobilty 2015  in Las Vegas.  To learn more about how Strategy Analytics’ unique combination of supply-side, demand-side, and telemetry capabilities can help your organization’s research requirements, we invite you to schedule a one-to-one meeting with our experts at the event.