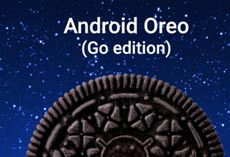 ~40M sold in Q3, increasing. With > 400M Indians connected by obsolete phones, India has become the second largest smartphone market and is gaining share against China. With monthly prices often under $5 and phones subsidized to $25-35, Deloitte estimates 350M more Indians will be connected by 2020. Reliance Jio added over 100M customers on 4G smartphones in the last year; the remaining survivors, especially Bharti & Vodafone, are scrambling to catch up.

Google's new Oreo Go version of Android is bringing the cost of low-end 4G phones to about $30, with the first units expected from Indian manufacturer Micromax by the end of the month. The inexpensive phones will be a natural way to connect in the amazing 625,000 villages being fibered by BharatNet.

Google CEO Sundar Pichai recently predicted $30 smartphones will lead to market takeoff in countries like India. Oreo Go is designed to work with less than a gigabit of memory and deliver adequate performance using very cheap processor chips. Google has optimized their primary apps to run well on Oreo and hopes others will follow.

Canalys analyst Ishan Dutt predicts Xiaomi will overtake Samsung to be the best selling brand. His > 40M sales estimate is similar to the IDC estimate. U.S. sales were similar but the U.S. market is close to saturation.

The Chinese vendors, including Oppo & Vivo but not Huawei, have massively taken market share from Indian companies like Micromax and Karbonn the last few years. The Indians weren't ready when Jio drove the market to 4G phones, but now are looking for market share.

The Chinese have been moving production to India to beat 15% tariffs and find lower labor costs. Apple has talked a good game, but is holding out for enormous tariff and tax subsidies from India. The government is resisting; they believe India is an attractive enough market Apple will come in anyway, especially as India is raising tariffs as part of the "Made in India" program.

After a wobble in Q2 2017, India’s smartphone market recovered quickly, with shipments growing 23% year on year in Q3 2017 to reach just over 40 million units. India has now overtaken the United States to become the world’s second largest smartphone market after China. Samsung and Xiaomi, which shipped 9.4 million and 9.2 million units respectively, accounted for almost half of the total market as the top five vendors continued to post strong growth in Q3 2017.

“This growth comes as a relief to the smartphone industry. Doubts about India’s market potential are clearly dispelled by this result,” said Canalys Research Analyst Ishan Dutt. “There are close to 100 mobile device brands sold in India, with more vendors arriving every quarter. In addition, India has one of the most complex channel landscapes, but with low barriers to entry. Growth will continue. Low smartphone penetration and the explosion of LTE are the main drivers.”

Despite posting excellent results, the market continues to concentrate, with the top five vendors (Samsung, Xiaomi, Vivo, Oppo and Lenovo) now accounting for 75% of total shipments in India. Samsung shipped 9.4 million smartphones, almost 30% more than in Q3 last year. Second-placed Xiaomi increased shipments by over 290% to 9.2 million units. “Xiaomi’s growth is a clear example of how a successful online brand can effectively enter the offline market while maintaining low overheads,” said Canalys Analyst Rushabh Doshi. “But Xiaomi focuses on the low end. It struggles in the mid-range (devices priced between INR15,000 and INR20,000 [US$230 and US$310]), where Samsung, Oppo and Vivo are particularly strong. Nevertheless, we predict Xiaomi’s continued go-to-market innovations will allow it to overtake Samsung within a couple of quarters.”mpared with Q3 2016, impressive growth in a market that is skewed toward low-end smartphones.

After a rocky start to GST, the market has shown strong signs of stability in Q3, with most of the channel adapting to the new rules on time. “The Indian economy is proving very strong in the second half of 2017, now that the twin shocks of GST and demonetization are behind it,” added Doshi. “Reduced indirect taxes have added new equity to the market, with distributors and retailers able to serve areas beyond their home regions as inter-state operations become easier. As the infrastructure matures, consolidation in distribution is inevitable.”