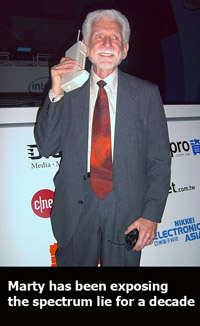 Lowell was more polite, of course. Verizon didn't buy any spectrum in the last auction despite prices that were down by 50-60%. "We simply don’t need it," explains Chief Network Officer Nicola Palmer. Lowell McAdam told Morgan, "When you look at the spectrum and the cost of small cells versus the cost of spectrum in the old AWS auction sort of environment, it was clear to us that building the fiber infrastructure to densify via small cells was better than the alternative of a buying spectrum." CFO Matt Ellis explained to Craig Moffett, "Spectrum is one way that we can add that capacity, but it's not the only way,"

Technology allows adding relatively inexpensive capacity within existing spectrum faster than demand is growing. Verizon estimates the cost per bit is going down 40%/year; Telus estimates 55%. Verizon's capex has been flat to down but they now are offering new unlimited plans. McAdam expects capex to stay flat for the next decade, despite one of the largest 5G mmWave builds in the world.

If spectrum were short, he would have to plan to raise capex.

Marty Cooper built the world's first cellphone at Motorola and won the Marconi Prize in 2013. He says, "We've never had a spectrum shortage and we never will." I've heard similar from Henry Samueli, Ted Rappaport, AJ Paulraj, Vint Cerf, Stagg Newman, and many others.  (Google any of them.)

Spectrum is but one requirement for wireless networks, very rarely the effective limiting factor. Improved technology, required financial returns, and competitive intensity almost always will have more impact on wireless network builds. The growth in consumer demand - which is rapidly dropping - is the typical short-term driver.

Marty's comment "There's never been a spectrum shortage and never will be," needs to be put into context. Having more spectrum does reduce the cost of building most networks by reducing the number of cells you need for capacity. It's not required - you can add antennas, cells, and improved technology instead. Verizon CFO Fran Shammo calculated building out small cells, etc, was 60-70% below the price in the previous spectrum sale. At some price, adding spectrum is cheaper, but at that point the total cost is modest. (1-2% of the customer price. That's a small fraction of the marketing budget and not enough to change the economics of wireless.)

Verizon, AT&T, Telstra, and Reliance Infocomm have backed away from buying spectrum at current prices. Reliance even is looking to surrender some of the spectrum they now control, to reduce payments to the government. (Note: Reliance Infocomm, owned by Anil Ambani, is not the same company as Reliance Jio, owned by his brother Mukesh.)
There are rare cases where spectrum shortages drive up costs modestly. In the short run, sometimes it is impractical to upgrade networks as needed, although with low cost small cells that's uncommon. Also, I believe that Indian telcos, until the 2016 auction, did suffer from inadequate spectrum because the government severely limited availability.
There is a point with any given level of technology where limited spectrum does drive up costs. Today's tech allows most telcos to deliver one gigabit across a cell, as promised for 2017 by AT&T, T-Mobile, and Sprint. Massive MIMO will probably double or triple that in the next two or three years. My best guess today is that you probably need more spectrum these days if your target speed is between 3 and 10 gigabits per cell.
The only carrier in the world who currently believes they need more than 1-3 gigabits is Verizon. Lowell McAdam wants ~5 gigabits to completely replace all cable to the neighborhood. Verizon is spending $billions on 5G millimeter wave. The Europeans think he's crazy, that there isn't enough demand for that much capacity to pay the cost of the many needed mmWave small cells. (The CJK Asians are in a prestige race, but Lowell thinks he will have a good business. Unproven.)

Every senior network engineer knows the above, but some people in policy still don't get it.