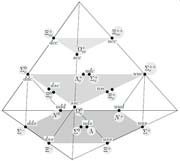 {jcomments on}10,000 engineers are producing remarkable advances in wireless. As 2017 begins, AT&T, BT, DT, and a dozen other telcos are racing to Gig LTE. Thousands of Massive MIMO cells are deploying at Softbank Japan and China Mobile. 10X to 25X capacity improvements are possible many places in 2017-2019. 5G mmWave fixed in 2017 will run at 5 gig and I've seen demos at 20 gig. Verizon, KT, and AT&T have begun fixed mmWave trials to move to commercial service starting in 2018. Those are the headline moves, but I'm learning from folks like Telus CTO Ibrahim Gedeon to look at another half-dozen tools soon coming out of the labs. To get the conversation moving, I'm publishing this vision 0.1, really just a draft.

We're at an inflection point on the path to the 50X to 100X wireless capacity growth. World class engineers - Paulraj, Samueli, Cerf, Goldsmith, Rappaport - explained at Marconi events in 2014 this would happen. Nobody but engineers believed them.  Real networks are now proving them right.

Gedeon got me thinking when he said SON/HetNet improvements for his small cells are more important today for his customers than "5G." We were at Huawei's MBBF in Tokyo, listening to speeches extolling the latest fads. As I walked the exhibit floor, I could see 20 gig mmWave and Gig LTE running flawlessly and  Massive MIMO as deploying at Softbank and China Mobile. But Huawei's $10B annual research budget is deep; they had examples of many other tools network builders will be using.

I'm calling this the Eightfold way to emphasize the many choices. Jennie and I are working on a related video. Here's some of what I'm researching, best known first. Gig LTE isn't included as a separate category. Gig LTE prime components, 4x4 MIMO and 3-4 channel carrier aggregation, are simply early versions of M-MIMO and CA, below. I didn't write much here about mmWave and Massive MIMO because I've covered them in detail separately. Ideas welcome.

Massive MIMO went commercial in 2016 when Softbank opened 100 cells in Japan. Capacity improved 9 times in Shinjuku and 6.7 times on average in company measurements. Presumably, they chose the more promising locations first; China Mobile is reporting 3 times for now. Speeds will vary by terrain and are likely to go up further as the software and antennas are refined.

Millimeter wave high frequency works and almost surely will be important. As I write early in 2017, AT&T and Verizon intend to do fixed mmWave to hundreds of homes in 2017, probably. Verizon CEO Lowell McAdam is a true believer on fixed mmWave as a competitor to fiber and forecasts wide deployment very early. Korea Telekom and SK Telecom will showcase 5G at the Korean Olympics in 2018. They almost certainly will include mobile mmWave, although not necessarily in volume. Qualcomm and Intel will have mobile phone chips in 2018.

Almost everyone expects mobile mmWave to be rare until after 2020 when the standard is set. Seizo Onoe, NTT CTO and often a pioneer, doesn't expect any volume before 2022-2023. Ted Rappaport disagrees, telling me Millimeter wave "Will come sooner and reach longer distances." We all hope he is right. mmWave costs and ideal technology are unclear until far more reaches the field.

HetNets and SON for interference reduction between cells. Telus, like Verizon, is running fiber deep into neighborhoods. They have a large fiber home network, are working on G.fast, and adding LTE small cells. Dense cells interfere with each other, a well-known problem that severely limits efficiency. There's massive literature on how to approach this problem and much practical engineering, but comprehensive solutions are just starting to appear. Gedeon is working with Huawei and likes the early results. (HetNets - heterogeneous networks - received that name because the original commercial offerings focused on problems like small & femtocells interacting with cell towers. SON - Self-organizing networks - try to solve the impracticality of human analysis to organize many small cells,  much less adapt to the constant changes.) This was one of the most talked about technologies a few years ago and is finally starting to make a difference. Telus & Huawei have a paper. A helpful discussion from Erol Hepsaydir, Three UK

Sharing spectrum Wi-Fi proves that shared spectrum can deliver more capacity. The U.S. is moving ahead on sharing 3.5 GHz frequencies now mostly used by the military; the navy doesn't use the spectrum in the middle of the country. December 2016, a major British government report recommended sharing licensed spectrum as well. Telcos led by Verizon, working with Qualcomm, have demonstrated LTE can share spectrum with Wi-Fi in LAA. (LAA works but the rules from 3GPP do not protect Wi-Fi adequately. They are an anti-consumer mistake.) There are numerous techniques that need to be perfected. The U.S. 3.5 GHz incorporates an online registry. Wi-Fi has dynamic mechanisms for each unit to check what others are doing, hunting for a chance to transmit without interference. LAA works with a control channel in licensed spectrum. The academics have a slew of proposals that need to be tried in the real world.

Sharing the spectrum in the 3.5 GHz band is now beginning after four years of work led by John Leibowitz at the FCC and Larry Strickling of NTIA. The White House PCAST Report has a strong recommendation to share more spectrum. While the telcos generally try to block programs that release spectrum, they went along with this one because they expected to get most of it. Their massive lobbying team will scream holy hell if they have to share the spectrum they have but it's the right thing to do. If Verizon and Sprint had an agreement to use the other's spectrum that's currently occupied, each would see an increase in capacity of 20-30% (my estimate, but really a guess.) They have different customer bases in different regions and often different demand peaks. Often, one will have capacity while the other is close to congestion.

Contrary to general belief, a strong majority of low band spectrum is not in use even at peaks in a busy city like Chicago. (See data by Professor Dennis Roberson.) Putting more to use through sharing will be very powerful.

Full Duplex uses the same spectrum for both upstream and down, yielding a likely throughput increase of 50% or more. Moore's Law has brought the cost of processing power down enough for the many calculations needed for interference cancellation. It's being actively tested by companies like Telecom Italia. I believe Kumu Networks will have product on the market in 2017 for certain uses. Expanding that to mobile four channel and 4x4 MIMO isn't ready yet.

Reducing the capacity demands of the billions of IoT devices. NB-IoT, starting to deploy in LTE networks, allows connection while using less spectrum. Most IoT devices send only limited data, often for brief periods. NB-IoT is a partial solution, with advances possible beyond that. The 80 MHz of 802.11ac and the 40 MHz of LTE/LAA should be considered harmful; ways to use no more spectrum than needed are necessary.

Ways to put more spectrum bands in use. Both Verizon and AT&T recently told Wall Street they have 40 MHz of unused spectrum each, enough to double their current capacity. That would require aggregating four or five bands. 2016 brought three band aggregation, with ten band on the way. The iPhone 7 can support three times as many bands as earlier models. The coming Samsung 8 and the Qualcomm 835 chip take that to four times the bandwidth. This requires re-inventing all the radio frequency components on the phone for drastically reduced size and power consumption. Avago did this for Apple. Supporting 25 bands is moving towards frequency agile software defined radio. Full SDR doesn't fit in a mobile phone that's less than military sized - yet.

Most countries have hundreds of megahertz unused around 3.5 GHz, just now being made available. The newly shared 3.5 GHz band in the U.S. could support four Verizon-sized networks.  3.5 GHz spectrum is more efficient than 4.9 GHz, the target of LAA. The U.S. auction is making 600 MHz available; the Brazilians 450 MHz. 5 GHz to 6 GHz is becoming practical.

Carrier aggregation puts the bands together for maximum speeds when needed, including Gig LTE. Ways to do the opposite - use less spectrum when not needed - have enormous potential.

Several techniques I'm combining into item eight because I like the title Eightfold Way.  Murray Gell-Mann's Eightfold Way unified sub-atomic physics. He took the name from the Buddhists. The Noble Eightfold Path is Right Understanding, Right Intent, Right Speech, Right Action, Right Livelihood, Right Effort, Right Mindfulness and Right Concentration. They include better antennas in phones and base stations; power tweaks such as HPUE; analog improvements that allow going beyond 256 QAM;  and more.

There will be generations of technology still to come. They will be called "6G," which will again be a near-meaningless marketing term. "Cell free" systems will reconfigure the cell boundaries and other parameters on the fly, optimizing for the actual demand at that moment. Huawei's CloudAir looks like an actual instance of the long sought software defined radio.TCP/IP is not efficient for mobile and replacements have been proposed. Local radio coordination is being pioneered in Wi-Fi and automotive DSRC. Moore's Law isn't dead yet, and faster chips open new possibilities.

Halving the bandwidth needed can do as much as doubling the network capacity. Google's new RAISR delivers a remarkable picture at half the size. Advances in video encoding continue; applying AI in a RAISR-like style is promising. T-Mobile is reducing video to 480P by default, probably halving the file size with only a modest change in quality on most phones. This must be under easy control by customers or is a violation of neutrality.

A note on WI-Fi: You can't look at the wireless future without including Wi-Fi. One basic is that most incumbent telcos in some areas can double capacity for minimal cost simply by turning on a second SSID in customers existing home gateways. As I walk around Manhattan or Paris and look for Wi-Fi, I usually see gateways from both the local cableco and telco. Automatically using that instead of the LTE tower can dramatically decrease demand on the towers. Some telcos are doing that, but most are avoiding it. They charge for LTE data but not Wi-Fi. For the big U.S. carriers, it probably would be the equivalent of adding 20 MHz+ where they most need it.

Line of sight 802.11ac works well for a kilometer or two, making it a very viable choice for areas without tall buildings or hills. Starry has ambitious plans for Boston. Wi-Fi is far cheaper and easier to manage for the local connection at the end of rural fiber. India and others are running fiber to hundreds of thousands of villages. Put up a 50-foot pole and Wi-Fi can give good coverage at a very low cost, with easy operation.