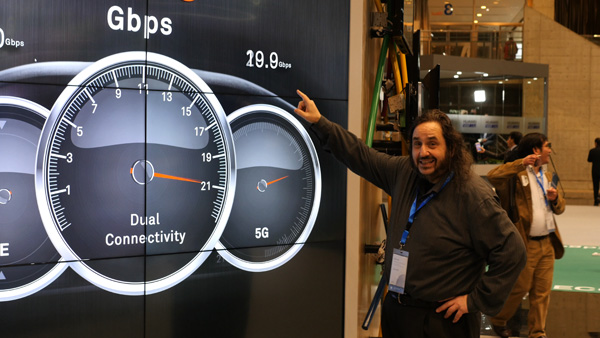 It does work! Throughout the show, two large screens showed live data from a 1 GHz mmWave + 4x4 LTE MIMO system. The results were consistently between 19 gigabits and 21 gigabits. About 1 gigabit was LTE, an example of the gigabit LTE that will be sweeping the industry in the next two years. The mmWave gear ran consistently at 19 or 20 gigabits. While Huawei said nothing about availability, I infer 2020 is the target for working production equipment for mobile.

Not one of the dozens of network engineers I've spoken to lately disagreed with Ted Rappaport's conclusion "It will work." While we have no field results on millimeter wave to consumers, there are decades of results of mmWave for backhaul, high-speed point to point wireless, and heavy military usage.

The 20 gig mmWave is the headline, but also note the consistent gigabit from LTE. As you can see from the picture, Huawei did something I haven't seen from anyone else. The signals were combined, live, At that moment, the mmWave was running at 19.9 gig; the central meter showed they combined for 21 Gbps. Obstacles and distance can bring down the speed 90%+ and the LTE boost will be a major improvement. Softbank Japan and China Mobile are ordering thousands of Massive MIMO base stations, which can be configured to support several gigabits in LTE bands. There are intriguing possibilities.

On the floor I saw an 8 x 2 MIMO already deployed in Kuwait that improved performance 50% in congested areas. I saw the 2 Gig LTE being tested at BT. Customers showed great demos of VR, robot manufacturing, and drones.

I learned that Softbank Japan and China Mobile are ordering thousands of Massive MIMO base stations. Telus CTO Ibrahim Gedeon reminded us that small cell HetNet and SON as well as other less publicized advances shouldn't be forgotten. That inspired my Eightfold Way piece. Softbank and China Mobile told me Massive MIMO was working so well they were ready to order thousands. http://bit.ly/8foldway

The 20 gig Huawei system has more than enough capacity for what Verizon is planning. The NSA is still blocking Huawei systems from the U.S., probably because Huawei refuses to cooperate with the U.S. three letter agencies. VZ will have to choose between Ericsson, Nokia, and Samsung, the vendors approved for the U.S. There are no U.S. companies that can build a 5G network, although Rappaport and others at U.S. universities are doing some of the world's best 5G research.

There are lots of hurdles to come, especially on mobile. The cost, the market, and the timing are unknown. NTT CTO Seizo Onoe is probably right; deployment of mmWave gear will likely be modest until 2022-2024. Dozens of major issues need to be decided in standards, some not before 2019 or 2020. Hundreds of technical problems need to be solved. Early mmWave phone chips will likely require an order of magnitude more power and eat batteries. It will probably take two more iterations of Moore's Law to bring chip power demands and cost down to where we are are today in LTE. There are over 10,000 engineers working to solve the technical problems and I'm sure they will. The impossible takes a little longer.

Pepper the robot dancing Gangnam style was the hit of the show.

Important note: Huawei paid expenses for me and videographer Jennie Bourne to the event.