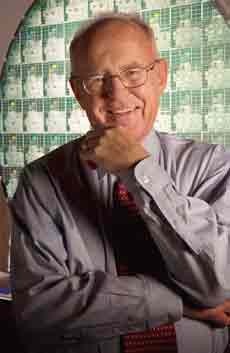 2019 Mobile 5G Phones! blazes on ads across the trade media from Qualcomm. "You’ll see 5G in 2019 for sure," Qualcomm CEO Steve Mollenkopf promises. Verizon has begun a huge, rapid deployment of mmWave, with hundreds of sites installed.

Mollenkopf himself thought it would be 2020, but new technology is allowing him to chop a year off the schedule. His main foundry, TSMC, has begun "risk production" of 7 nm chips, the next generation. It's reasonable to expect volume production in 2019. TSMC is taking delivery in 2018 on $150M EUV machines to improve critical layers. Steve is going for 2019 because he can.

Verizon will be ready to serve mobile 5G "as soon as phones are available." China Mobile and AT&T are also looking to build early. They will be expensive and probably power hogs, but a true gigabit should be possible. ("Gig LTE" will usually be 75-300 megabits to the customer, per Qualcomm.)

Qualcomm is using Gordon Moore's old tactic, of putting rivals "on a treadmill." Intel threatens to be a serious competitor, with an investment of over $5B before their 5G is ready. MediaTek has been gaining market share, at least until Qualcomm 835, a great design.

Intel made its first killing on the early 1103 memory chip, which rapidly replaced magnetic core memory in mainframe computers. It was Intel's alone for a good while, but eventually others matched the chip. Moore's strategy was to up investment and move to 4K chips. The next generation would give them a better, more capable product and keep revenues back up. He also explained that the faster next generation would put the other guys "on a treadmill," having to divert their own resources from competing in the 1K generation to prevent falling behind. After that success, Intel made a practice of increasing spending when challenged, even in down markets.

Broadcom spent billions on LTE chips before deciding they couldn't find a market. Three others also fell away a few tears ago. Moore;s Law isn't dead, but the cost to design chips and stay in the game is now well over $100M. Few can play at that level.

Every once in a long while, a new technology comes along that redefines the boundaries and assumptions that came before it. While it is still being extensively tested, 5G NR mmWave is emerging as a key technology that could define the next big moment in the mobile industry, ushering in the next generation of user experiences and significantly increasing network capacity.

It is coming at just the right time, too. Mobile networks are facing soaring demands for mobile data as consumers increasingly utilize mobile devices to share and consume high-fidelity multi-media. On top of this, as the capabilities of mobile devices continue to grow — think high-resolution cameras, 4K video, VR, AR— so does the ever-increasing consumer demand for faster, better connectivity.

Although the use of bands above 24 GHz for wireless communications is nothing new, mmWave is a completely new frontier for mobile that is very compelling as the large bandwidths available at these high frequencies enables extremely high data rates and significant increases in capacity. mmWave bands have been utilized for quite some time in fixed, line-of-sight wireless communications for fixed wireless backhaul and satellite communications. However, increased propagation loss, susceptibility to blockage (e.g. hand, head, body, foliage, building penetration), and RFIC complexity and power-efficiency, has historically made these high-bands not feasible for mobile communications. That is, until now. 5G NR based mmWave is changing this, and Qualcomm is leading the way.

There is a decent amount of skepticism in the industry on the ability to make mobile 5G NR mmWave a commercial reality in 2019 — overcoming the challenges at these higher frequencies to deliver robust mobile communications in mobile form factors, like smartphones.

At Qualcomm, we have a long history of solving wireless challenges that others thought were impossible. We have been working on the key design elements necessary to harness mmWave bands for usage in mobile broadband communication systems — proving to both ourselves and the industry what is feasible and what needs more work. I am very excited to share with you some of the progress we’ve made on this subject.

At Mobile World Congress in Barcelona earlier this year, we demonstrated our first-generation 5G mmWave prototype system, operating at 28 GHz. The prototype system and over-the-air testing was conducted utilizing our 5G mmWave trial network we built at our Research Center in New Jersey. Our testing went far-beyond the typical 5G mmWave industry demonstration of a multi-gigabit, line-of-sight mmWave communication link. The testing showcases how advanced 5G NR adaptive beamforming and beam tracking techniques can be utilized to deliver robust mobile broadband communications in real-world environments. These real-world environments included device mobility inside a moving vehicle, indoor mobility in an office environment including wall penetration, dynamic body- and hand-blocking, and fast beam-switching between multiple base stations (gNodeBs).

Another common area of skepticism for utilizing mmWave bands in mobile networks is the need for massive small cell deployments to take advantage of these technologies. This need for many new small cell sites leads some to believe that even if 5G NR mmWave could deliver robust mobile communications, it will take many years to reach commercial reality as deploying all these new sites would take a lot of time and investment by mobile operators.

5G NR mmWave will require dense network topologies with inter-site distances of ~150 to 200m. However, based on a set of simulation studies we recently performed in large cities across the world (results for five global cities shown below in Figure 2), we have shown that significant outdoor coverage is possible utilizing existing LTE macro and small cell sites. This significant outdoor coverage makes mobile deployments based on existing cell sites possible, especially when considering the tight-interworking of 5G NR with LTE to fill in the coverage gaps.

The dominant mobile form factor today is, of course, the smartphone. Over the last 5+ years, RF complexity in our mobile devices has exploded due to the increasing amount of frequency bands and band combinations. Adding mmWave to 5G mobile devices will even further increase this complexity as it will require mmWave RF Front-end (RFFE) modules with multiple antenna elements for beamforming in X-, Y-, and Z-directions. Furthermore, multiple locations will be required to account for body- and hand-blocking. And therefore, another source of skepticism with utilization of mmWave bands for mobile is whether fitting this RF complexity into a smartphone form factor is even possible.

We recently announced our new 5G NR mmWave prototype and trial platform to accelerate mobile deployments for smartphones. The 2nd generation 5G mmWave prototype is based on the 5G New Radio (NR) Release-15 specifications being developed by 3GPP and will be utilized in upcoming 3GPP-based 5G NR mmWave interoperability testing and over-the-air 5G NR trials starting in the second half of 2017. With support for 800 MHz bandwidth and advanced 5G NR technologies including advanced channel coding, the prototype system is designed to support peak download speeds of up to 5 gigabits per second.

The UE prototype enables over-the-air testing of real-world mmWave mobile challenges, such as device and hand-blocking. Additionally, it provides mobile device OEMs an opportunity to gain an early start at optimizing their devices for the unique challenges associated with integrating 5G NR mmWave technologies in form factor-accurate devices.

Making 5G NR mmWave a 2019 commercial reality… in your smartphone

There is still work to be done in order to make 5G NR mmWave a commercial reality in 2019.

First and most immediate, the anchor of the 5G NR mobile experience will be Gigabit LTE. Gigabit LTE is providing the first glimpse of 5G enhanced mobile broadband today and is an essential upgrade for mobile networks on the path to 5G. Qualcomm has been leading the way on Gigabit LTE, which has truly become a global phenomenon in 2017.

On the 5G NR front, the industry is hard at work finalizing the first release (Rel-15) of the 3GPP technical specifications, including the Non-Standalone (aka NSA) 5G NR specifications that are expected to be completed at the end of this year. Our Qualcomm Research 5G NR prototype systems, both mmWave and sub-6 GHz, were designed to track and drive this standardization process. As such, these prototype systems are built to support early 3GPP-compliant 5G NR interoperability testing with infrastructure vendors starting later this year. This will then lead to 3GPP-compliant over-the-air trials with mobile network operators that will test 5G NR mmWave and sub-6 GHz technologies in real-world deployment scenarios and use cases.

The testing and trials intend to drive the mobile ecosystem toward rapid validation and commercialization of 5G NR technologies at scale. Qualcomm Technologies is utilizing learning from the testing and trials to help continue to drive the ongoing development of the Qualcomm Snapdragon X50 5G modem family, with the first 3GPP standard-compliant 5G commercial products, including premium smartphones, featuring Snapdragon X50 5G NR modems expected to be available in 2019.

Although there is still work to do, we are confident that we can achieve this next big moment in the mobile industry, making 5G NR mmWave a commercial reality in 2019 mobile networks and mobile devices, including smartphones. But don’t just take my word — learn more by downloading our new presentation and watching our recent webinar.