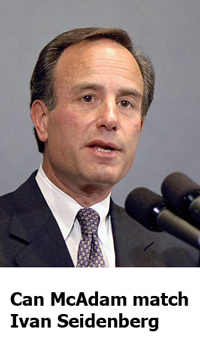 Suddenly, it's possible and happening. Costs are down; performance and reach up; "commercial deployments" moved to 2019 by Verizon and AT&T mobile may be ready for 2020. Engineers like NTT CTO Seizo Inoe are moving up their forecasts for time to revenue. Tests are going better than expected. Most of the challenges holding back big telcos are being solved.

Nothing is certain, but many top engineers are close to convinced. I believe McAdam at Verizon has decided to go full speed ahead. Six months ago, then CFO Fran Shammo told Wall Street not to put 5G into their capex models for several years. He wanted to see the test results in 2018 before going ahead. Since then, Fran's been replaced by Matt Ellis. Verizon changed 2017 test plans from a few homes near their Boston research labs to 11 cities around the country. They've made a firm commitment to a "commercial deployment" of fixed in 2019.

Verizon engineers are enthused about what they've seen in testing around the world.

Verizon in particular needs the capacity, must reinforce a reputation as the best, wants a lever for regulators, and needs a dramatic recovery from their worst quarter in a decade. Cable is killing them in the half of their territory without Fios. Customers are hemorrhaging to Sprint and especially T-Mobile. Don't cry for Lowell McAdam; they still made $3.5B in this "worst quarter." These are the factors I see particular to Verizon.